Native to the South, 'Mrs. Schiller's Delight' is semi-evergreen, tough and tolerant.

By Norman Winter for CAES News

It’s been amusing watching visitors get out of their cars and start taking photos of shrubs around the parking lot at the University of Georgia Coastal Georgia Botanical Gardens. Sometimes we even laughingly call these tough-as-nails plants “parking lot shrubs.” I am referring to ‘Mrs. Schiller’s Delight,’ a selection of the native Walter’s viburnum. At the gardens we have viburnums from China, India and Japan, but this small, compact native is one that has to be the ideal bones and structure plant of any garden.

Botanically speaking, this little workhorse is Viburnum obovatum. It is native in four Southeast states: Alabama, Georgia, Florida and South Carolina. Though it is native to the South, it is cold hardy through zone 6. In the wild, the species may look like a tall shrub or small tree, reaching 12 to 15 feet in height. But ‘Mrs. Schillers Delight,’ introduced by nurseryman Steve Reifler in Florida, made a huge impact not only on the landscape trade, but on the nursery industry as well.

‘Mrs. Schiller’s Delight’ reaches about 3 feet tall and is slightly wider. Ours are covered with white flowers that cause everyone to jump out of the car with the camera blazing. Every week I hear from my son who bemoans issues with boxwoods and, like the V8 beverage commercial I think, “Wow, you could have had a ‘Mrs. Schiller’s Delight.’” The same goes for me, because while we have lost dozens of dwarf yaupon hollies in our formal garden due to various water issues, we have only lost ‘Mrs. Schillers Delight’ viburnums to reckless drivers.

In Savannah, Georgia, ours are pretty much evergreen, but in colder areas, they tend to be semievergreen to deciduous. We grow ours in the sweltering hot sun, adjacent to the parking lot and our visitor and education center, but they are very tolerant of shadier locations in the landscape. The white flowers will give way to fruit that ages from red to purple to black and is devoured by birds.

As you might guess by the native region, they do prefer acidic soils, much like the azalea. Though they are found in the wild in moist, almost bog-like conditions, they will thrive in fertile soil and become quite drought tolerant once established. Though I have facetiously touted them as the parking lot plant, they certainly have a lot of landscape potential. We’ve clustered them around the taller, conical-shaped oak-leaf hollies and at the base of palms. We are using them in partnership with podocarpus or Japanese yew and surround them with seasonal color. The ‘Mrs. Schiller’s Delight’ viburnum is a very versatile plant and, while the birds may love the fruit, you may want to celebrate the fact that the plant itself is not normally on the local deer menu.

Spring planting season is arriving early in much of the country, and when it shows up in your area, consider using this little, native selection as a foundation plant for your home. You will find it easy to grow, requiring practically no maintenance, and you’ll be rewarded with a blanket of welcoming, white flowers next year. Follow me on Twitter @CGBGgardenguru. 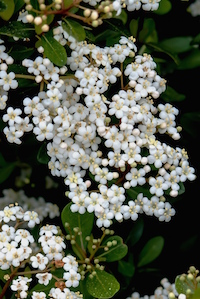 UGA’s Dario Chavez spotlighted in Fruit Growers News 40 Under 40 class Posted on 08/06/20 by Sean J Montgomery
University of Georgia researcher Dario Chavez has been named to the Fruit and Vegetable 40 Under 40 Class of 2020 by Fruit Growers News. The prestigious honor places Chavez within a small group of young professionals who are making remarkable contributions within the industry.

Broad sequencing of tomato genomes will help geneticists breed better varieties Posted on 07/30/20 by Maria M. Lameiras
New technology has led to a greater understanding of how gene placement within the tomato genome influences gene expression and, therefore, the characteristics of the resulting plant’s fruit, a discovery that is important for breeders and producers.

Georgia vegetable growers should prepare now for harvesting Posted on 06/18/20 by Andre Luiz Biscaia Ribeiro da Silva
As we approach the harvest season for watermelon, bell pepper, tomato, yellow squash, zucchini, cucumber, sweet corn and other crops, Georgia vegetable growers can move ahead and prepare seasonal workers to mitigate the spread of COVID-19 during harvest time.

Smarter energy usage is key to a greener future Posted on 05/28/20 by Merritt Melancon
LED lightbulbs, programmable thermostats, high-density insulation and electric vehicles — despite these innovations, about two-thirds of the energy produced in the U.S. is lost to inefficiencies, according to national studies. For scientists and economists who work on the barriers between people and a sustainable future, that’s a dire number, but modern data management is helping to reduce it.