University of Georgia mycologist Marin Brewer has been awarded close to $500,000 from the United States Department of Agriculture National Institute of Food and Agriculture (NIFA) to search for ways to detect antifungal resistance in a naturally occurring fungus and identify the factors that contribute to its resistance in agricultural environments.

Throughout the three-year study, Brewer and her collaborator Michelle Momany, a professor in the UGA Franklin College of Arts and Sciences Department of Plant Biology, will focus on Aspergillus fumigatus, a fungus that is abundant in soil, compost and other organic debris. This fungus can cause serious lung infections in immunocompromised people.

“Antifungal treatments are used to treat both plants and people with fungal diseases, but fungal resistance to these treatments is developing in both the clinical and agricultural environments,” said Brewer, an associate professor in the UGA College of Agricultural and Environmental Sciences Department of Plant Pathology.

These azole compounds are also used to protect crops from fungi that cause plant diseases or produce deadly and carcinogenic fungal toxins in food and feed. In agricultural production, fungal diseases destroy about one-third of the world’s harvest of staple crops, like rice, wheat and corn.

Preliminary studies by Brewer and her UGA colleagues have shown that azole-resistant strains of A. fumigatus can be found in agricultural environments in the U.S. where azole fungicides are used.

“We need to improve molecular detection methods and identify problematic agricultural applications of azole in order to formulate strategies to slow the development of azole resistance, and to identify if azole-resistant strains are in food items produced where resistance is prevalent,” Brewer said.

Through her studies, Brewer also aims to determine if populations of resistant A. fumigatus in agricultural environments will likely decline or remain stable when azole fungicide is not applied.

“The goal is to better understand the development of azole resistance of A. fumigatus in agricultural environments so that efficient and targeted strategies aimed at mitigating antimicrobial resistance can be developed, and azoles can be preserved for use in treating human, animal and plant diseases caused by fungi,” she said.

Antimicrobial resistance in A. fumigatus, the cause of life-threatening aspergillosis in humans, to azole drugs has become a major public health concern worldwide. Studies have linked clinical resistance to increased agricultural use of azole fungicides to combat plant pathogens.

“Azoles are vital for human health, both in terms of fighting fungal infections and protecting food supplies from plant disease and deadly or carcinogenic fungal toxins,” Brewer said. “If we can identify where and how antifungal resistance is developing in these settings, we can work on limiting its occurrence so that we can preserve the effectiveness of azoles in treating both plants and people.”

For more information about Brewer’s research at UGA, go to site.caes.uga.edu/mycologylab. 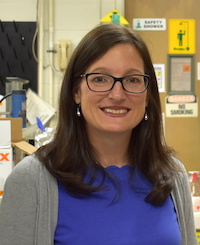 UGA’s Ellen Bauske receives national horticulture outreach honor Posted on 08/10/20 by Josh Paine
Ellen Bauske is a boundary spanner — she’s known as a person who brings people and organizations together on national, regional and local levels.

UGA researchers discover genes that allow bacteria to resist onion’s natural defenses Posted on 07/16/20 by Maria M. Lameiras
After years of building and analyzing sample collections, plant pathologists at the University of Georgia have identified the genes that allow a type of bacteria that causes onion center rot to resist onions’ natural defenses in a “chemical arms race.”

Shriveled blueberries could signal “mummy berry” disease Posted on 06/30/20 by Paul Pugliese
Blueberries are one of the most popular backyard fruits for Georgia because they are relatively low maintenance compared to other fruit species. However, there is one particular disease issue known as “mummy berry” that can be problematic for blueberry growers.