By Emily Cabrera for CAES News

University of Georgia faculty will begin a series of pecan trials this winter to help identify better management practices for growers.

New pecan trees will be planted at UGA College of Agricultural and Environmental Sciences Vidalia Onion and Vegetable Research Center in Toombs County for research and demonstration purposes. Andrew Sawyer, southeast Georgia area pecan agent for UGA Cooperative Extension, is spearheading several research projects with a team of UGA researchers looking at factors that impact the pecan industry such as variety selection, insect pest management, disease resistance, herbicide application rates and other input requirements. This research is funded by a Pecan Commodity Commission grant that was awarded last year.

Sawyer, who began this new position in May 2019, is based in Statesboro and supports pecan growers throughout southeast Georgia. The position is funded by the Georgia Pecan Growers Association and UGA Extension to support Extension pecan specialist Lenny Wells at the UGA Tifton campus.

The team will primarily study the effects of pecan scab fungus on various cultivars that grow well in the southeast. Pecan scab begins in the tissues of the tree trunk, and at bud break in the spring, the disease begins to rapidly spread through the limbs, leaves and eventually the nuts. It's the most detrimental disease to pecans in Georgia, causing severe economic losses each year. Currently, trees must be treated with several applications of fungicides annually in order to produce a marketable crop, as it only takes 25% scab on shucks to minimize quality.

'Desirable', 'Pawnee' and 'Stuart' are some of the most common pecan varieties grown in Georgia, valued for their excellent yield and nut quality. Of the three cultivars, growers have shown a preference for 'Desirable', which has now become the most susceptible variety to pecan scab.

“The most susceptible cultivars to this disease also happen to be the industry standards used here in the southeast,” explained Sawyer. "We didn’t use to see pecan scab in these cultivars, but over time, as the pecan industry became more or less a monoculture of 'Desirable', the disease has gained a foothold in orchards throughout the state. We are at a point that we shouldn’t be planting this cultivar in new orchards anymore. There may be some situations where growers are located in more northern areas of the state where this disease isn’t as hard-hitting, but most pecans are grown in warmer parts of the state where spraying from bud break to shell hardening requires an unsustainable amount of labor and money."

Sawyer hopes that through his research program, other low-input, marketable varieties will prove to be just as valuable as the current industry favorites. His recommendation for growers who are interested in establishing new orchards is to use a variety of cultivars to help minimize the risk of disease and pest issues.

“Since 2008, UGA researchers in Tifton have been working with alternative cultivars that are resistant to pecan scab, have low input requirements, are high yielding and produce great quality nuts. Some of the best varieties we’ve seen are 'Excel', 'Lakota', 'Gafford', 'McMillan' and 'Kanza' — a cold-tolerant variety that may be better suited for growers in north Georgia as well,” said Sawyer.

Low-input cultivars provide an economic benefit to growers, especially in southeast Georgia, because orchards in this region tend to be managed through commercial practices, but on a much smaller scale than found elsewhere in the state.

“When you have a smaller operation, but still have to shell out a lot of time and money into your crop, the cost-benefit ratio sometimes doesn’t work to your advantage," said Sawyer. "That’s why these low-input cultivars are so attractive, it means growers can save more time and money and end up with a great quality, high-yielding product without all the heavy investments. So, the Vidalia Onion Research Farm will be a great location in this part of the state to observe these low-input cultivars,” he added.

As research plots are established this winter, trees will be planted in such a way to accomplish both long-term variety research and short-term applied research goals. Sawyer and his team will be hosting several demonstrations at the research farm over the next few years to allow Extension agents and growers to participate in hands-on training about topics including planting, pruning, grafting, irrigation, pest and disease prevention strategies, and making herbicide treatments using different chemistries and rotations. 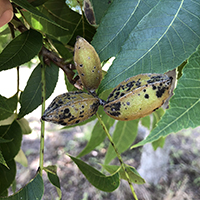 Milkweed pests can be a problem for monarch butterfly lovers Posted on 09/17/20 by Becky Griffin
With the fall migration underway for monarch butterflies through November, gardeners should soon start seeing the colorful creatures on their travels south. It's also time to be on the lookout for pests of common milkweed (Ascelpias tuberosa), the most popular milkweed plant grown in Georgia butterfly gardens.

As weather cools, prepare for fall insects Posted on 09/16/20 by Emily Cabrera
As the weather cools across the state, several fall insects will begin to take center stage around Georgia homes. Be on the lookout for these nuisance pests and make preparations to deter them from entering your home for the winter.

UGA researchers seek targets to mitigate fescue toxicity in cattle Posted on 09/10/20 by Maria M. Lameiras, Alec Lee
A $500,000 grant from the U.S. Department of Agriculture will allow researchers at the University of Georgia to examine the minutiae of cattle and fescue microbiome interaction to find targets that will help mitigate the effects of fescue toxicosis, a forage-related condition that costs the U.S. beef industry more than $1 billion each year.

UGA Mountain Research and Education Center becomes a seed bank location Posted on 09/03/20 by Josh Paine
Gold may be rare in the north Georgia mountains, but now the region boasts a seed bank that might be worth just as much to Appalachian natives and local gardening enthusiasts.
See More