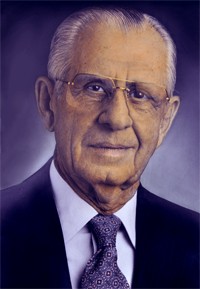 Calvin Murray, a North Carolinian, led a strong triad of instruction, research and extension. Ph.D. programs were approved in animal nutrition, food science and dairy manufacturing, awarding the College's first doctoral degree in 1959. Murray established the Department of Experimental Statistics in 1957, with the first purchase of a computer on the University campus. He established the Soil Testing Service in Athens in 1962. Dean Murray opened the doors of the Rock Eagle 4-H Center in 1956. During his progressive tenure, Dr. Murray emphasized a practical, hands-on education, including senior seminars for real-world practitioners and short courses in farm management, grain grading and food canning and freezing. He served as Director, Inter-Institutional Programs in International Affairs, University System of Georgia from 1968 until he retired in 1971.