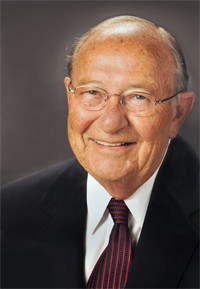 Christian Smit, a native of South Africa, served as acting dean for 14 months, bridging the gap between two long-term, successful deans. Dr. Smit conducted a distinguished career in academia and the private sector, serving as head of the Department of Food Science and later as Associate Dean for Academic Affairs, a position he held until his retirement in 1993. Dr. Smit’s soft-spoken and insightful management style contributed to the period of normalcy in the college during his administration.