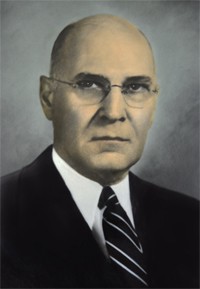 A Missouri native, Paul Chapman led the College during some of its most difficult financial times. Despite declining funds, the Great Depression and a world war, Dr. Chapman increased enrollment, reorganized the College and expanded programs of specialization. During his tenure, a massive food processing plant was built on campus to provide for the University's food needs while also advancing areas of food research. Student enrollment rose from 194 in 1934 to more than 1,000 in 1947. Dr. Chapman later served as Director of Resident Instruction during the Harry L. Brown and C.C. Murray administrations, until his death in 1952.