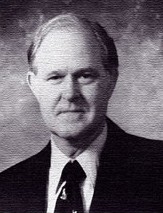 Known as the “Father of Center-Pivot Irrigation” in Georgia, Newton installed Georgia’s first center-pivot irrigation system in 1967. He led the way for the adoption of center-pivot irrigation throughout Georgia as part of his tractor and farm equipment business, Newton-Hamrick, Co. In 1969, he installed 12 systems, and doubled the number each year for several years afterward. There are now more than 11,000 center-pivot systems in Georgia, a benefit for farmers and agribusiness owners from Newton’s intuitive foresight.

In addition to his work with irrigation, Newton owned Green Circles Farms, Inc. He grew peanuts, corn and cotton while operating his farm equipment and irrigation dealership. In the mid-70’s, he began planting sweet corn and built southwest Georgia’s first hydro-cooler to extend the shelf life of sweet corn. This breakthrough allowed the shipment of sweet corn throughout North America and Canada and opened up the vegetable industry to Georgia. In 1979, he sold his retail businesses and purchased an additional 3,000 acres of farmland.

Recognized by University of Georgia researchers and extension vegetable specialists as the forerunner of Georgia’s modern vegetable industry, Newton shared his knowledge with them, hosting numerous tours of his farm, packing shed, and hydro-cooler.

Newton received several distinguished awards as an agriculturalist, including Georgia’s Money Maker Peanut Club (1984, ‘86, ‘89), awarded to the highest peanut yields in Georgia. He was awarded the Bainbridge-Decatur Chamber of Commerce Cotton Production Award (1985, ‘87) for the highest average yield in Decatur County, and was honored by the American Vegetable Grower Magazine with its “Top 100 Grower Award” in 1988 through 1991.