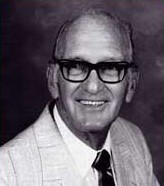 Bill Roquemore is viewed by many as the leading pioneer in the commercialization of forage and turfgrasses in Georgia. His leadership and vision helped boost Georgia’s turfgrass production to a $1.56 billion dollar industry.

A World War II veteran and a recipient of the Distinguished Flying Cross, he attended North Georgia College and joined the Army Air Corps after the bombing of Pearl Harbor. Roquemore became a lieutenant colonel and flew for the Air Force reserves after the war.

His professional career with Patten Seed Company began in 1947 and ended with his death in 1997. Through five decades of leadership and service, he was instrumental in turning a small seed-cleaning plant into one of largest warm-season grass sod and seed business with international sales. By designing a concept to provide the game of golf to everyday members, Roquemore became known as “the heart and soul of golf in the Southeast United States” In January of 1998, he was inducted into the Georgia Golf Hall of Fame for his contributions to promoting and furthering the game of golf.