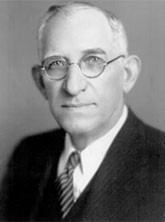 George Claud Adams dedicated his life to agriculture and the community. He was born the 12th of 16 children and spent most of his early life on the family farm.

Even though he had less than one year of formal education, never attending high school or college, Adams dedicated much of his career improving the education of boys and girls both in the classroom and on the farm.

He organized the Boys' Corn Club in Newton County in 1904. These corn clubs are widely known as the predecessors of Georgia 4-H, making Adams the “Father of 4-H” in Georgia. In 1913 the Girls' Tomato Canning Club, an offshoot of the boys' agricultural clubs, was created.

“His effort to teach 151 boys how to grow a better crop of corn was the beginning of the 4-H program in Georgia,” said Arch Smith, state 4-H director. “These young students carried back to their parents the message of better agricultural practices, which improved farm production methods in the early 1900s.”

Adams was one of the first 100 individuals inducted into the National 4-H Hall of Fame in 2002. He was one of three Georgians to be inducted.

“Adams' legacy as an educator and public servant lives through the 4-H program, which today reaches over 184,000 of the youngest students of the University of Georgia College of Agricultural and Environmental Sciences,” Smith said.

A Georgia historical marker in tribute to Adams was placed in front of the auditorium at the Rock Eagle 4-H Center in June 1962. Over 100 4-H boys and girls and 50 members of Adams' family were present for the unveiling.

“G.C. Adams surely has to be included on anyone's list of individuals making unusual and extraordinary contributions to agriculture and agribusiness industries in Georgia,” said Paul Wood, president and CEO of Georgia Electric Membership Corporation.