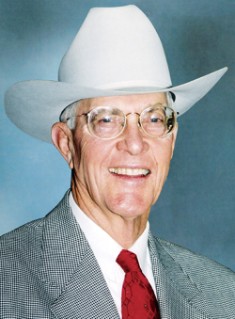 M.K. “Curly” Cook’s first position was assistant county agent in Mitchell County. After only a few years, he was selected to serve as an area livestock specialist. He was then promoted to state livestock specialist and relocated to Athens where he was considered the most versatile livestock specialist in Georgia. He was given the responsibility of supervising the newly formed Georgia Beef Cattle Improvement Association (BCIA). Under his leadership, this program grew to one of the largest and most effective BCIAs in the nation. Cook was one of the pioneers who was instrumental in the organization of the National Beef Improvement Federation (BIF), which is still active at present.

In 1981, Cook was promoted to the head of the Extension animal science department at UGA. His leadership ability resulted in the development of several “signature” programs making the University of Georgia a leader in Extension animal science education. Always committed to Georgia’s youth, Cook’s crowning achievement was the Georgia National Fairground and Agricenter.

In 1989, Cook became associate director of the Cooperative Extension Service. He also served as director, vice president and president of the Georgia County Agents Association.