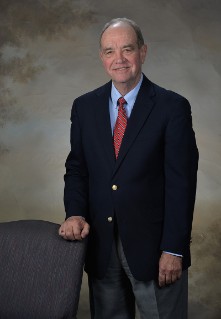 When Foster Rhodes was a county agent in Houston County, organizing 13 4-H clubs with 940 members, he envisioned a place where Georgia youth could exhibit their livestock projects. That vision came to fruition in the Georgia National Fairgrounds and AgriCenter in large part due to Rhodes’ vision, dedication and effort.

Since 1990, the Georgia National Fairgrounds and AgriCenter is the place Georgia’s youth can call its home away from home.

For his years of service, Rhodes is a 2019 inductee into the Georgia Agricultural Hall of Fame.

Rhodes has been a key member of the Georgia Agricultural Exposition Authority, which developed and now oversees the fairgrounds, since 1985. Today, he is chairman of the authority, a position he was elected to in March after serving as vice president since 1997.

It is because of Rhodes’ leadership and dedication that Georgia’s youth have a facility to showcase its projects, and agriculture can be promoted. Since the AgriCenter opened in 1990, it has attracted approximately 22 million people, providing a $1.5 billion economic impact. Approximately 850,000 people visit the fairgrounds and AgriCenter each year, giving them some exposure to agriculture.

“Professionally and personally, I have the utmost regard for Foster. He is an outstanding member of the Georgia agricultural community and is highly respected by his peers,” said Chip Blalock, executive director of the Sunbelt Agricultural Exposition and former county Extension agent. “I admire his integrity and honesty. There is no one more dedicated to and supportive of Georgia agriculture. He always goes beyond the norm to make a positive impact on his community and state.”

After beginning his career as a county agent in Houston County. Rhodes became one of Georgia’s first Extension state beef specialists, holding that position for three years. He worked across the state with agents and teachers through workshops to enhance the production of Georgia’s beef cattle industry.

Rhodes later transitioned to agribusiness when he moved to Perry to work with Gray Walker Tractor Company. He purchased the company in 1987 and now operates it as Walker-Rhodes Tractor Company, where it is a source for agricultural and industrial equipment for the middle Georgia area. His primary markets are row crop, industrial, lawn and garden, orchard and groves, hay and forages, and livestock.

Rhodes is a native of Perry, Georgia. His service to the community includes serving as chairman of the Administrative Board; Sunday school superintendent at Perry United Methodist Church; and chairman of the board of trustees at Westfield School. He’s also received the Community Service award from the Perry Chamber of Commerce and was named the Kiwanis Man of the Year. His business, Walker-Rhodes Tractor Co. has been a cornerstone supporter of Perry, Houston County, and Georgia.

He has dedicated his life to serving others, and Georgia residents, young and old, are reaping the benefits of that service.

“I have known Mr. Rhodes as a student, classmate and co-worker for more than 50 years. He is one of the finest individuals I have had the pleasure of knowing,” said Curly Cook, who was inducted into the Georgia Agriculture Hall of Fame in 2006. “He has had an outstanding record in high school, college, and as a business community leader in Perry and Houston County.”