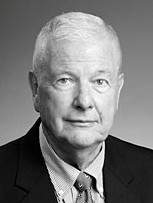 Mr. Thompson is a pioneer in the field of agribusiness. Many of the banking services he started have been instituted across Georgia. He is a member and past chairman of the Georgia Bankers Association Agriculture Committee which informs Georgia bankers on issues concerning community, economic and agribusiness development. He served as chairman of the Southeast Georgia Area Planning and Development Commission. Since 1974, he has served as the Altamaha District's soil-and-water supervisor where he sets priorities for giving federal technical assistance to farmers and other landowners. Mr. Thompson has been appointed to Georgia's State Soil Conservation Committee by four Georgia governors. In 1982, Progressive Farmer magazine named Mr. Thompson Man of the Year in Service to Georgia. Thompson served as President of the Agricultural Alumni Association of the University of Georgia in 1980. He was honored as the 16th recipient of the Distinguished Alumnus Award from ABAC in 1984 and served as President of the ABAC Alumni Board in 1985.