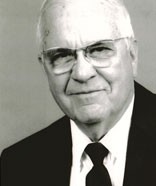 From the time he worked as a County Extension Agent to the years spent working as a farm broadcaster, Ragan has devoted his life to informing others about agriculture and helping the southern farmer.

After graduating from the University of Georgia in 1945, Ragan went to work for the UGA Extension Service in the Grady, Stewart, and Seminole Counties.  He spent six and a half years with the Extension Service. While in extension, Ragan recognized the potential of radio and television for disseminating critical information to farmers. In 1953, Ragan lined up sponsors and created “The Ragan Report” and “The Gene Ragan Farm Show” for radio. Five years later, he made the transition to television when he introduced “The Noon Farm Report” which ran on Dothan, Alabama’s WTVY, reaching farmers throughout the Tri-States area. He broadcast an estimated 30,000 shows until his retirement in 1998. Amazingly, he was never employed by a radio or television station, preferring to remain a private contractor, with independence to serve the Tri-state agricultural industry.

His print media works included writing the farm page of the Dothan Eagle.  He was the first advertising manager of the Southeastern Peanut Farmer.  For 45 years, he aired roughly 30,000 shows until his 1998 retirement.

In 2006, Ragan was inducted into the National Association of Farm Broadcasters Hall of Fame, located in the National Agricultural Hall of Fame in Bonner Springs, Kansas. “The Noon Farm Report” is believed to be the longest running TV farm program on a single station in the United States. Ragan’s work has left him with seven other Hall of Fame inductions and related honors.