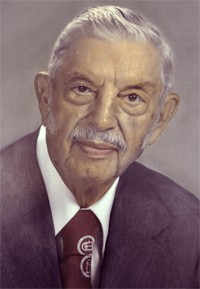 After retiring from the College of Agriculture, Dr. Brown served in the Georgia Senate and was co-author of the bill creating the Georgia Development Authority, where he was a charter member of the Board of Directors. He served as a public member of the Foreign Service Selection Board of the U.S. Senate Department to evaluate employees in the U.S. Diplomatic Corps. He served as president of the Georgia Livestock Association and the UGA Agricultural Alumni Association. He held several offices in the Georgia and American Farm Bureau and was honored with their "Award for Distinguished and Meritorious Service." Progressive Farmer Magazine named him Man of the Year.

Occupation: Served in a number of administrative positions in the Extension Service before he was appointed Dean of the College of Agriculture.