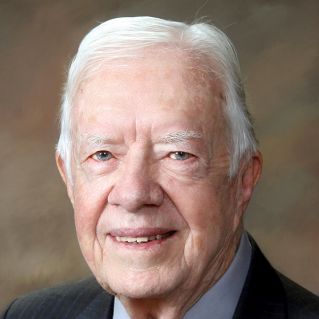 Jimmy Carter, the 39th president of the United States, grew up in the tiny farming community of Archery, Georgia.

After graduating from the U.S. Naval Academy in 1946, Carter served as a submariner in the U.S. Navy's Atlantic and Pacific fleets. In 1953, he returned to Georgia with his wife, Rosalynn, and their children to run the Carter family peanut farm and warehouse in Plains. In 1962, he was elected to the Georgia Senate, and in 1971, became Georgia’s 76th governor.

On November 2, 1976, Carter became the first native Georgian elected to serve as president of the U.S. During his time in office, Carter remained a steadfast supporter of Georgia agriculture. In 1982, he founded The Carter Center in Atlanta. The center addresses national and international policy issues and advocates for agricultural development, human rights, conflict mediation, and free and fair elections.