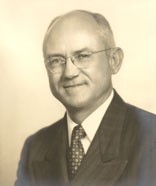 Lawson L. Patten was known as an innovator, businessman and civic leader, and was a pioneer in the commercialization of forage grasses.

His greatest legacy lies with his leadership in starting and developing the grass and turf business in Georgia. With his help, the Georgia Crop Improvement Association was established in 1946 and is now world-renowned as a leader in the protection and assurance of the genetic seed purity of crop cultures.

Patten grew up in Milltown, Ga., known now as Lakeland. He completed high school and graduated in 1914 from Riverside Military Academy in Gainesville, Ga., and then attended Georgia Tech. In 1927, Patten was named general manager of the Lakeland Railway.

In 1940, Patten became interested in Bermudagrass after visiting the Coastal Plain Experiment Station and began to harvest coastal Bermudagrass to show its practicality.

By 1950, interest in the grass rose so high that he started Patten Seed Company. He sold sprigs of Bermudagrass across the U.S. as the main certified grower of the hybrid.

Because of the pioneering efforts of Patten Seed Company, turf has become one of the largest agricultural commodities in Georgia.

Patten was elected as mayor pro tem of the Lakeland, Ga., City Council in 1921 and served as mayor of Lakeland in 1925. Patten served Lanier, Echols, Lowndes, Cook and Berrien counties as State Senator in 1936.

Camp Patten, a Boy Scout camp in Lanier County, was named after him in 1965 to honor his donation of land for the camp.

Patten married Clyde Purcell in 1920 and they had three children and many grandchildren and great-grandchildren. Patten's son-in-law, W.A. “Bill” Roquemore, was inducted into the Georgia Agricultural Hall of Fame in 2005.