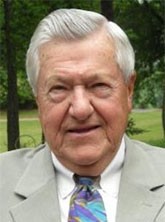 Even after retiring from the University of Georgia in 1992, Louis J. Boyd has retained a leading role in Georgia agriculture and in the College of Agricultural and Environmental Sciences.

He began his 42-year career at UGA in 1972, after gaining his master's degree at the University of Kentucky and his Ph.D. at the University of Illinois. Boyd's first position at UGA was managing teaching, research and Extension activities as chairman of the Animal Sciences Division.

“He was instrumental in merging two departments into the Department of Animal and Dairy Science,” said Rep. Chuck Williams of Boyd. “Many of the faculty hired by Louie Boyd in the 1970s established themselves as outstanding researchers and teachers, with many becoming department heads or research directors.”

During his first years at UGA, Boyd proposed that the Ag Alumni Association have an option of lifelong membership to provide a long term funding mechanism for the organization. This proposal led to the creation of the Eterna Fund, the Association's endowment that has provided over $160,000 in scholarships to entering CAES freshmen and transfer students.

Boyd was influential in securing private donations for CAES. He served as the CAES representative for the UGA Bicentennial Fund, which established scholarships and improvement funds while connecting potential donors with CAES.

When he retired from UGA, Boyd was asked to develop and lead the statewide Advisory Board for Agricultural Experiment Stations in Georgia. This board later merged with the Extension Advisory Council, forming the CAES Advisory Council.

“In summary, Dr. Louie Boyd epitomizes those traits that qualify one for the Georgia Agricultural Hall of Fame,” Williams said. “The Hall of Fame is Georgia's singular most significant recognition of exceptional service to agriculture in our great state.”