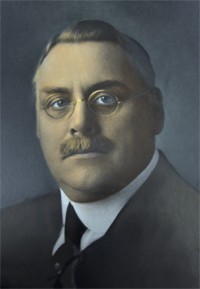 Andrew Soule, a Canadian, was barely 37 years old when he came to the University of Georgia in 1907 to serve as President of the Georgia State College of Agriculture. He held this post until 1932, when the College was reorganized under the University of Georgia. As President of the Georgia State College of Agriculture, Soule increased public and financial support for the College. Forestry, veterinary medicine, animal husbandry and home economics were established as departments. He implemented a modern program of agricultural studies, initiated the Cooperative Extension program and vastly expanded the faculty. Dr. Soule built a campus from almost nothing. "King Andy's" dynamic leadership moved the College's administrative home from the Georgia State College of Agriculture Board of Trustees back to UGA as it had been prior to the establishment of the Agriculture Board of Trustees in 1906.