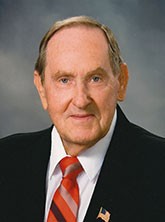 Buddy Leger, who has grown pecans and watermelons in Cordele since the 1960s, was inducted into the Georgia Agricultural Hall of Fame in honor of his lifelong support of agriculture and his work expanding markets for some of Georgia's top commodities — watermelons and pecans.

He founded the National Watermelon Promotion Board in the 1980s to bring together watermelon producers and shippers to support research into better watermelon varieties and growing techniques.

In 1995 he spearheaded the creation of the Georgia Commodity Commission for Pecans. The group, composed of pecan producers across the state, has helped pay for increased marketing of Georgia pecans, which has created a national and international market for the nuts.