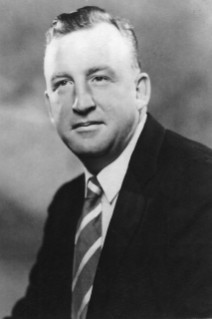 A former University of Georgia Extension agent and poultry specialist, Herb Bennett has been called "the father of the commercial egg industry in Georgia."

Bennett graduated in 1931 from the UGA College of Agriculture and began his ag career on a dairy farm. He later switched his attention to poultry science, a career change that would greatly benefit the poultry industry.

He served as the county agent in Jasper, Madison and Dodge counties and became a UGA poultry specialist in 1944.

Bennett helped launch the industry in Georgia through his sound poultry husbandry techniques that were adopted by other southern states. His methods were also shared through a UGA video, "Feathering the Nest," that was translated into Spanish and used in Puerto Rico, the Caribbean and parts of Central and South America. He authored numerous Extension poultry articles including one based on his experience building and operating Georgia's first 300-foot laying house.

With funding from the Sears-Roebuck Foundation, Bennett began the 4-H Club Poultry Chains to teach children the process of raising poultry from chicks to layers. The clubs began in eight counties and grew to include 1,500 boys and girls in 123 Georgia counties by 1954. Today, Georgia 4-H'ers learn about poultry and Georgia's largest ag industry through poultry judging and poultry projects.