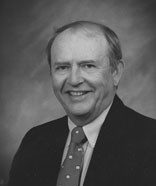 Born into a farming family in Grady County, Georgia, Crawford married Yvonne Harrison, graduated Abraham Baldwin Agricultural College (ABAC) in ‘61 and UGA in ‘63.  Awarded the National Cotton Council’s Cotton Foundation Fellowship, he obtained his Masters in ’65 and completed his PhD in Plant Pathology in ’69. In his first position with UGA, Crawford was Extension Plant Pathologist-Cotton based in Tifton, and was a charter member of the Extension Cotton Team. He became the Extension Agronomist for Cotton in 1986 and in the early 1990’s became Head of the Extension Plant Pathology Department, where he continued to lead the Cotton Team.  As Extension Specialist, Crawford conducted over 1200 educational meetings, published 134 research and extension reports, co-authored 2 books and wrote over 400 Extension publications, articles and circular letters.  Recognizing the potential for cotton production in Georgia, Crawford cooperated with researchers, county agents and farmers to implement effective production methods. His work with nematode control, irrigation, variety selection and crop management laid the foundation for a rebound in Georgia cotton production, from a low of 100,000 acres in the 70’s to over a million acres every year since ‘95.

After retirement, Crawford remained active in agriculture as a cotton farmer and President and General Manager of South Central Georgia Gin Company. Crawford serves on the board of the UGA Athletic Association and UGA Extension Retiree Association. He is a member of the UGA President’s Club and supports the CAES Eterna Fund. He volunteers for the CAES Alumni Association and was president in ‘07. He is a deacon and bible teacher at Northside Baptist Church of Tifton.  He and wife Yvonne live in Chula and have 3 children and 8 grandchildren.