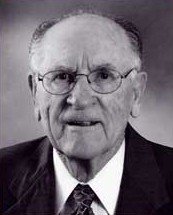 Ray Jensen was a pioneer in the commercialization of turf grasses. He served in the Counter Intelligence Core of the U.S. Army and was a soil scientist with the USDA Soil Conservation Service from 1941 to 1955. In 1950, he was the first to commercially produce and harvest centipede grass seed. He was a key leader in helping to transform centipede grass from an unknown grass to one of the most popular lawn and landscaping grasses in the South and around the world. Turf is one of the largest agricultural commodities in Georgia, due in large part to Jensen’s innovative efforts.

Jensen developed large combines fitted with special heads and vacuums, pioneered the market for vegetatively propagated grasses, and developed a transplanter, which, modified and automated, is still used today.

To promote the improved bermuda grasses developed by USDA and the University of Georgia for golf course use, Jensen formed Southern Turf Nurseries. His company was a key player in the development of turf into a multi-billion dollar business around the world.

Including Southern Turf Nurseries, Jensen is the founder, owner and operator of Tifton Seed Farms and Hall and Jensen Farms. He has served as trustee for the Abraham Baldwin Agricultural College for over 30 years. He is an honorary alumnus of ABAC and an honorary member of the Future Farmers of America (FFA). He has been active in the Tifton/Tift County Chamber of Commerce having received both Wall of Fame and Stafford awards. He has also held leadership roles on the Tift County Airport Authority, the Tift County Development Authority, the First Community Bank Board of Directors, and was president of Interstate Motor Hotels. Jensen was a founder of the Tift Regional Medical Foundation and remains active in personally funding scholarships.