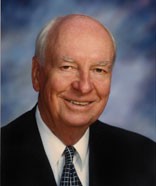 Because of Dr. Tal DuVall’s dedication to the core land-grant mission and his desire to ‘pay it forward’, Georgia continues to benefit from his numerous career contributions.

In 1956, DuVall began his extension career as an Assistant County Agent in Carroll County. The following year he was promoted to County Agent.  In 1965, he was appointed County Agent for Clarke County. Following his work at the county level, he went on to serve as District Agent for Northeast Georgia in 1967 and Northwest Georgia in 1969. He was named Assistant Director of Extension in 1972. Capping his career, DuVall was appointed Director of the Georgia Extension Service in 1977, the position he held until his retirement in 1988.

During his time as Director, Duvall led the efforts to establish the Jekyll Island 4-H Center. Working in concert with Dr. Tom Rodgers and key state leaders, Duvall helped paved the way for the successful fundraising and renovation of the Rock Eagle 4-H Center in the ‘80s.

He is responsible for publication of the annual Georgia County Guide, and under his supervision, the Integrated Pest Management Program of Georgia and the supporting County Pest Management Associations became the national model for reducing agricultural pesticide costs while providing a database resource for agricultural research.