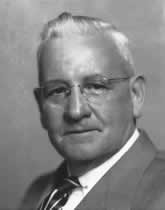 He grew up working the Breedlove Dairy Farm with his father William Luther Breedlove. The first dairy to sell bottled milk in Walton County, Breedlove Dairy Farm was already a beacon of agricultural innovation when Thomas Breedlove took it over. Despite losing his left hand and forearm in a silage clipper accident when he was 20, Breedlove continued to run the successful farm with his wife, Mattie Estes Breedlove, four sons and four daughters in addition to serving his local community. As the Great Depression came to an end, Breedlove became a leader in Georgia agriculture and helped implement some of the reforms and innovations that shaped Georgia agriculture in the second half of the twentieth century.

He helped introduce Georgia farmers to what is today the USDA Farm Service Agency, and he was the first and longest-serving executive director of its precursor, Georgia’s Agriculture Adjustment Administration, working for the organization from 1939-1955.

Breedlove was a founding board member and the first president of Walton EMC, the electric membership cooperative that helped bring electricity to thousands of farm families in northeast Georgia during the 1930s. His vision for an electrified countryside had a profound influence on agriculture in Georgia, especially dairy farms.

He also helped found the United Georgia Farmers, now known as the Georgia Farm Bureau, the largest farm organization in Georgia with more than 300,000 members.

While his public life was busy, Breedlove found time to maintain the original Breedlove Dairy Farm and expand the family’s holdings to include a 1,000-acre beef farm in Morgan County, which was run by his daughter Sara and her husband Henry Verner.

Breedlove led Georgia farmers through a time of uncertainty and his example has led future generations of his family to continue working to improve the lives of their fellow citizens and support Georgia agriculture in their personal and public lives.

Chambliss and Breedlove inducted into the Georgia Agricultural Hall of Fame